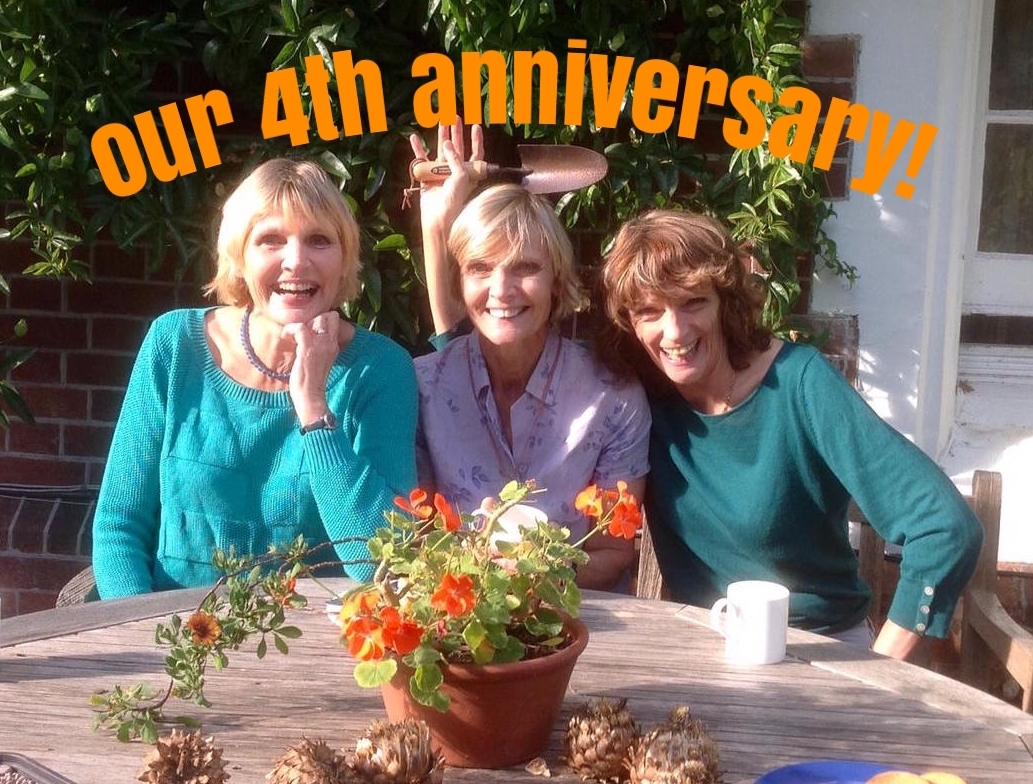 The3Growbags are celebrating! It’s the fourth anniversary of our blog. We began it because all three of us enjoyed gardening and wanted to make the physical distance between us seem less vast. We’re still loving every minute and the horticultural hilarity that comes with it.

Since we began we’ve had Brexit, right royal shenanigans, world war anniversaries and a national pandemic we couldn’t have imagined back in 2016 keeping us ALL apart.

So now our blog is not only bridging the gap between sisters, but between nearly 2000 subscribers and many more on social media. And to mark this auspicious 4-year milestone in our story, we’ve decided to celebrate the ‘people’ side of plants by inviting a few of the funny, kind, clever gardening folk we’ve met along the way, to share their views about What’s Hot and What’s Not, in their gardens this year. (We thought we’d pop in our own two pennyworth as well, obviously………….!)

So who are our guests?

From left to right (or clockwise on a phone) , Geoff Stonebanks, Kirsty Wilson, Tamsin Westhorpe and Jean Griffin.

Geoff Stonebanks is the assistant county organiser and publicity officer for the National Garden Scheme in East and Mid Sussex. His garden ‘Driftwood’ in Seaford, has appeared on Gardeners’ World and has been a finalist in national competitions. He’s raised over £131,000 for charities, including £80,000 for Macmillan Cancer support.

Tamsin Westhorpe is an RHS judge, co-chair of the the Garden Media Guild, lecturer, director of the Stockton Bury Garden, Herefordshire and author of the recently published Diary of a Modern Country Gardener.

Kirsty Wilson is Herbaceous Supervisor at the Royal Botanic Garden Edinburgh. She is also an award-winning garden designer, photographer and a member of the  RHS Herbaceous Committee.  In 2019 she joined the BBC Beechgrove Garden Television series as a presenter and recently returned from a seed collecting expedition to Yunnan, China.

Jean Griffin describes herself as first and foremost, a passionate gardener and allotmenteer, but also stars on the BBC Radio Kent ‘Sunday Gardening’ show and judges South & South East in Bloom and London in Bloom amongst many other horticultural roles and committees.

You’ll find links to their websites etc. at the bottom of the blog.

What plants would you like to get, and why?

GEOFF: Not being a trained or expert gardener, I like to get any plant or shrub that takes my fancy, whether I’ve got the right growing conditions for it or not! So, if it’s a bit different and I like it, I’ll get it and it has two choices, sink or swim! My latest is Mangave ‘Moonglow’!

TAMSIN: For some reason, during lock down I’ve admired plants that are either tricky to grow, enormous or very expensive. I have very decadent taste at the moment.

As we haven’t been able to go out and visit gardens and nurseries most of the plants I’ve added to my wish list have been spotted on twitter or instagram. I eyed up the giant Magnolia obovata on @emeny_richard twitter feed and now I want one. The only problem is that it’s massive. It will reach 12m but the flowers have a heavenly scent. I think I might find the space somehow.

My second wish-list plant is an orchid that I spotted on @GardeningSaul twitter feed. It’s an early flowerer called Cypripedium ‘Barry Phillips’. It looks far too exotic to be called Barry! This would be perfect for the greenhouse at Stockton Bury Gardens. Wonderful green flowers with a large lip and a very fat bowl.

KIRSTY: At the Royal Botanic Garden of Edinburgh I’m responsible for the Chinese hillside which conserves Chinese plants from wild origin. In this location I’d love to get Deinanthe cerulea sometimes referred to as the herbaceous hydrangea. It was first identified in the Hubei, China by the famous plant hunter Ernest Henry Wilson. It has attractive purple flowers and thrives in a cool moist shady woodland. I think this would make a wonderful addition to our Chinese collection of plants.

JEAN: I would like to get more tree paeonies because they are a challenge to grow on heavy clay soil.

ELAINE: Oh, Jean, I LOVE tree peonies! As you may know, I am a complete sucker for cottage-style plants, and I recently saw a very delectable Nectaroscordum (these plants are VERY like alliums, which are basically pretty onions). I grow the ordinary one, N. siculum, but this one is pink and so pretty – it’s called N. tripedale – add to the list, please……

LAURA: For me it’s gonna be Dahlia imperialis. Elaine will disapprove, because it’s jungly, not cottagey and Caroline won’t have heard of it. Anyway it’s too late because I’ve already ordered one from the estimable Woottens of Wenhaston. It grows 10 foot tall, flowers at the end of October and creates a fantastic tropical feel.

CAROLINE: I won’t be intimidated by E & L but still have to whisper this in today’s august company – I get excited about nasturtiums. I’ve also ‘actioned’ my dream already. Tropaeolum majus ‘Empress of India’ from Sarah Raven safely in the ground. Tried some classily subtle ones last year, but they just weren’t me.

So, what plants are getting the chop and why?

GEOFF: I’ve quite a good track record of success in nurturing what I buy, so don’t remember the last one I gave the chop to! However one that I love but is probably a bit too invasive, even for me, is sea buckthorn, new shoots keep pushing their way through and have to be cut out! Another are lupins, I love them but they don’t love me or my garden so invariably get the chop!

KIRSTY: I don’t actually remove anything from our national collection of plants unless it is dead or diseased.

TAMSIN: Can I choose a weed? I am drowning in ground elder at my home. It is literally springing up everywhere. I’ve cooked with it, trampled on it, pulled at it and spoken to it but it seems it’s here to stay.

An ornamental plant that I have recently given the chop is a very old hebe (not sure what variety). It’s been here for years and it never flowers. I rather enjoyed digging it out after deliberating over it for years. As I get older I am far more attracted to deciduous shrubs as I love to see the seasonal change, so the evergreens are at risk!

JEAN: I will be digging out the stump of an old tree fern as it has done nothing for the last two years and so HAS to go !!!

ELAINE: I have had a lemon verbena plant, Aloysia triphylla, growing by the path in the garden for many years, delighting visitors with its sherbet-lemon scent, but it’s very old, very woody and ugly now, so it’s got to go. Luckily I’ve already taken cuttings…….!

LAURA: Again, I’ve already taken action. Saponaria officinalis (soapwort) was a dream come true when I first got it. A froth of succulent pink flowers even in the middle of a drought – it was a delight. But like most things that seem too good to be true, it had a downside and starting running uncontrollably through the rest of the gravel garden. It had to go.

Any that will get a second chance?

KIRSTY: Hypericum forrestii does seed all over the borders which can be annoying in unwanted areas but I forgive this shrub when it blooms. The buzz from the bees during flowering is deafening and the cheerful yellow flowers always make me smile!

TAMSIN: Every year I plant a few more Fritillaria imperialis. The results are hit and miss. Some come up blind one year and the next offer a breathtaking display. There seems to be no rhyme or reason as to why some years are better than others. This year my ‘Orange Beauty’ fritillaries are out of this world. I’ve photographed them as I can’t be sure that next year they’ll perform. I won’t dig them up though – they are worth the risk and don’t take up much space.

The other plant I’m not giving up on is Lilium regale. Every year they get attacked by lily beetles and I spend the evenings picking off and squishing these red devils. It’s worth the effort though as the scent of the flowers is heavenly.

JEAN: A grafted dwarf Seville orange tree which flowered and fruited its socks off ( made lovely marmalade from the fruit ) then it must have got really cold when I was away in NZ for 2 months, dropped all its leaves but is still alive, have hard pruned it and will hope for the best !

GEOFF: I’m a hoarder, both in the garden and the house, I can’t bear to discard a plant until I’m absolutely sure it’s had it! So, you’ve gathered most do get a second chance. A most recent second chancer has been a Brazilian fuchsia which was well worth the effort.

I would describe myself as gifted amateur who is more at home dressing the garden as a film set or using it as a canvas to paint with plants.

ELAINE: When I was given the impressively-named Stylophorum diphyllum, (yellow wood poppy) I was warned that if it’s happy, it spreads……………and so it does, but it likes moist part-shaded woodlands in America best, so I thought I’d be okay with my dry chalky warm garden in Eastbourne. It is indeed self-seeding around gently, but so far, so good (and easy to pull up!) and I do LOVE its bright poppy flowers amongst the glaucous oak-like leaves. So I’m keeping it !

LAURA: Well I refuse to be beaten by Caroline for whom this plant flowers regularly with gay abandon in Scotland but I’ve had a Crambe cordifolia for FIVE YEARS now and although the leaves get bigger each year still no sign of a flower bud yet. But I’m not giving up …..

CAROLINE: My intersectional paeonia ‘Bartzella’. I tell it if it can’t produce a flower there are plenty others that will; that if it doesn’t pull its socks up it’s going, but it knows I’m all talk. Basically it just goes back to playing video games and sleeping all day, safe in the knowledge I’ll love it come what may.

So there you have it! A veritable smorgasbord of styles, likes and dislikes, but all tied together by our shared passion for gardening. Thank you so much to Kirsty, Tamsin, Jean and Geoff for agreeing to take part in this little Growbag odyssey, and for your wonderful contributions which have made for a considerably better blog than the one we produced four years ago.

Time to crack open the champagne now, and then press on and see if we can make it to five years!

Meanwhile keep in touch with our fantastic guests:

NB: Another of our gardening heroes and great friend Louise Sims has chosen a fantastic asset for small gardens to be her Great Plant this Month

Another NB: If you missed Wednesday’s DigYourOwnaForCorona post we were talking spuds, squalls and squirrels.

More NB: If you’d like to get a bit more gardening chit-chat from the3growbags, please do sign up here for our weekly posts: