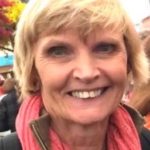 Still in recovery from the rigours of making my garden sufficiently presentable for its open day,  we’ve taken a few days off. Being a farming family we endlessly enjoy the British countryside so our holidays are invariably taken here in the UK.  With five of our seven dogs we are currently on the Isle of Islay in the Southern Hebrides, a rocky and windswept outpost of the British Isles with actually nothing between us and America. A less hospitable environment for creating a garden would be difficult to imagine. But put up a wall and something magical happens.

The passing Gulf Stream provides a mild climate, fertile acid soils and plentiful rainfall – it is actually only the wind that creates the limiting factor here and if you take this out of the equation then some of the most stunning gardens in the UK are possible.
We spent a glorious morning in the gardens of the Sunderland Estate on one of their open days and opening the door to their walled garden was like stepping through a looking glass.

Here  subtropical plants that limp along in the Home Counties look sumptuously happy;  Crinodendron smothered in plump red lanterns, Euphorbia mellifera reaching tree like proportions and our Chelsea favourite, Isoplexsis, here happily throwing up endless flower spikes.
Most of these Hebridean islands will have one these garden paradises for you to visit and be transported by, Colonsay and Ghiga are two others well worth seeking out and of course Inverewe over on the mainland is of the same ilk.

But there are dark forces at work. The Isle of Jura is home to the queen of all Hebridean walled gardens, a totally unique collection of sub tropical gems artfully tended in a naturalistic style, and had the most charming plant sales area and tea marquee. However, bought by a wealthy hedge fund manager a few years ago the garden was summarily closed to the public as it apparently presented a ‘security risk’.  This is a tragedy both for horticulturists making the pilgrimage to its gates and for the fragile economy of Jura itself. It’s tempting to try petitioning for it to be re-opened – any thoughts or comments welcomed.

Land use in the Highlands and Islands is as contentious as immigration in Middle England. Together with religion and politics, it’s what drives you out to your herbaceous border in my opinion. Speaking of which, sourcing some ready-to-plant crimson dahlias for my border is proving as challenging as buying a Furby on Christmas Eve. The country has run out! Even Sarah Raven is down to the rims when it comes to classy dahlias – gap in the market here folks.

It’s a pity as I’d been totally inspired to raise my planting game following a visit to Vine Cottage in Dirleton, East Lothian,  open this weekend as part of the Scotland’s Gardens scheme. Really beautiful white planting to the rear of the cottage and stunning ‘hot’ beds at the front featuring a very pretty Lysimachia Atropurpurea ‘Beaujolais’ (even the plant names had an association with ‘Vine’ Cottage), and spectacular crimson flowering broad beans adding practicality + style, a really superior small garden. I love this confidence to pick great looking plants that don’t feature in Dobbie’s idea of a standard garden. A different Dirleton garden’s wow factor was a beautiful stand of flax that added 1920s glamour to an already stunning border.

After a good start my confidence in winning the 3Growbags’ Chiltern Seed Challenge is ebbing. Phalecia – doing good; Gypsophila – showing willing; zinnia and rudbeckia – I’m nightly guarding the appearance of one seedling; craspedia and nicotiana – missing in action.

Laura’s on holiday and Elaine isn’t in Normany to check hers. Her garden in Eastbourne has been open this weekend but our next blog features her struggles in France so I’m rather hoping they include difficulties in germinating seeds.