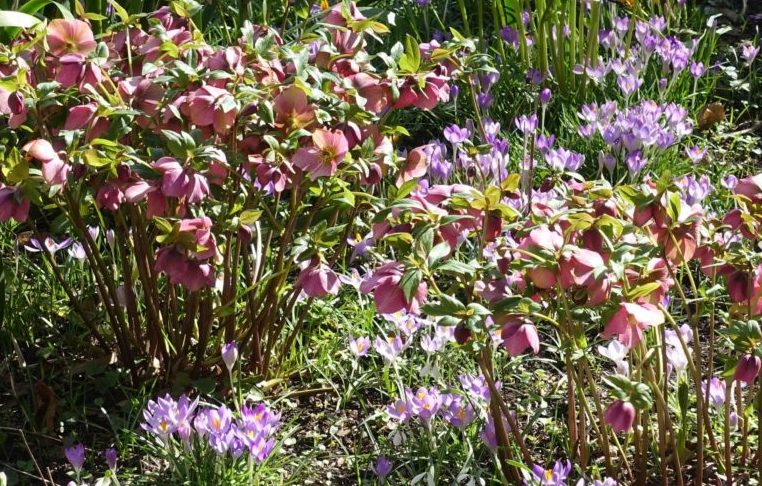 Did you know the latest fad (you know I like to be bang on trend) is to have freckles tattooed over your nose? I hated mine when I was young and now that they’ve morphed into the liver spots of advancing age, they’re the reason I try to keep my hat and shirt on (mostly). However, freckles are looking fabulous right here, right now…. inside a hellebore.
I have a huge range from the glowing chartreuse green of tall Helleborus argutifolius to the dark sultry opalescence of the H.orientalis varieties. They are nothing short of a February miracle (just like Louise’s Great Plant this Month – and what a fabulous eye she has for planting combinations).

But my favourite hellebores are the pale freckly ones. Turn up each modestly-dropped flower-head and it’s preciously pretty.  The charming ‘petals’ are actually sepals (the real petals are the tiny bits forming a circle in the middle). It’s why they don’t drop off as petals would, but last for weeks going elegantly green around the developing seeds. Remember to cut off the leaves of these orientalis cultivars in November before they go black and manky and spoil the look of the emerging flower-stems.
There are dozens of species of hellebore – all pretty poisonous by the way (‘harmful to eat’ is the translation from the Greek, so no nibbling). For once, our own native H.foetidus is one of the loveliest.  It’s not a  pretty name (although ‘fetid’ is a tremendously satisfying word and apt when contemplating a teenager’s bedroom or Owen Farrell’s jockstrap).  In fact, this delightful plant only pongs if you crush the leathery leaves – rarely a temptation.  It grows 2-3 feet tall, and carries its flowers of pale green bells edged in maroon for weeks through the early spring.
What a shame though that commercial growers are hybridising hellebores at a rate of knots – I don’t like all those new double varieties around now – sorry, very clever and all that, but not for me.

For once I agree with Elaine. Hellebores are such a top drawer plant it was only a matter of time before the plant breeders started to capitalise on their assets – I can almost hear Dragon’s Den doyen Deborah Meaden demanding diversification of the product range and scaling up to maximise returns.
The plant breeders struggled initially as hellebores take two or three years to flower from seed and were then difficult to divide. So for a while the best they could manage were improved seed strains (such as ‘Ballard’ and ‘Ashwood’ ) produced by continually crossing plants with good traits and cross-pollinating various species to produce seeds which gave a greater colour range and more upturned flower heads.

But recently the breeding programme has advanced and they’re able to cross smaller, leathery-leaved species such as the Christmas Rose (Helleborus niger ) with their taller H.orientalis cousins producing much more muscular plants. These can now be micro-propagated to give endless identical clones which sell for the type of money that would keep a whole den of Dragons in champagne and caviar.
Some of these new varieties are amazing, ‘Anna’s Red’ for  example, but they are a world away from the shy, freckled beauties with their gentle nodding heads that Elaine has described and I can’t help thinking that in the plant breeders quest to milk and monetise their attributes hellebores have, a bit like One Direction, lost their charm and innocence along the way.

What a moan Laura and Elaine are. It’s all, ‘I used to buy x, y and z and still get change from a ten bob note’. They do wallow around in yesteryear sometimes.
Personally I’m not too bothered about the purity of the broodstock, or whether nurseries benefit from economies of scale. And truthfully not all the single hellebores are knock-out anyway. I bought H. ‘Angel Glow’ (attracted by the ‘scaled up’ number of buds actually, to show you just how shallow I am), but now it’s in flower it looks like a Poundland table decoration.
Now some of those new doubles are gorgeous – look up H. ‘Double Maroon’ or ‘Onyx Oddysey’, they’re sexy beyond belief. And despite her disdain for doubles, Laura recently spent an eye watering sum on a ‘Harvington Double Red’ which I notice she isn’t owning up to.

No, no, have a go at some of those new dark doubles I say – they give modern heft in your garden at a time when everything else is still rather cold and feeble.
A few growing notes: hellebores prefer neutral soil, so dig in a little lime to an acidic bed. They like slightly moist but free-draining conditions in dappled shade, but they’ll grow pretty much anywhere if you compensate by adding compost or leafmould to the soil and keep them damp-ish in summer, (I sound knowledgable like L and E, but actually this is just what I’ve read).
Hellebores do well in Scotland. Like so many plants here they are thought to ward off  evil spirits but after delivering Donald Trump to the world (his mum was Scottish) and with Indyref2 in prospect, we clearly need to be growing more.