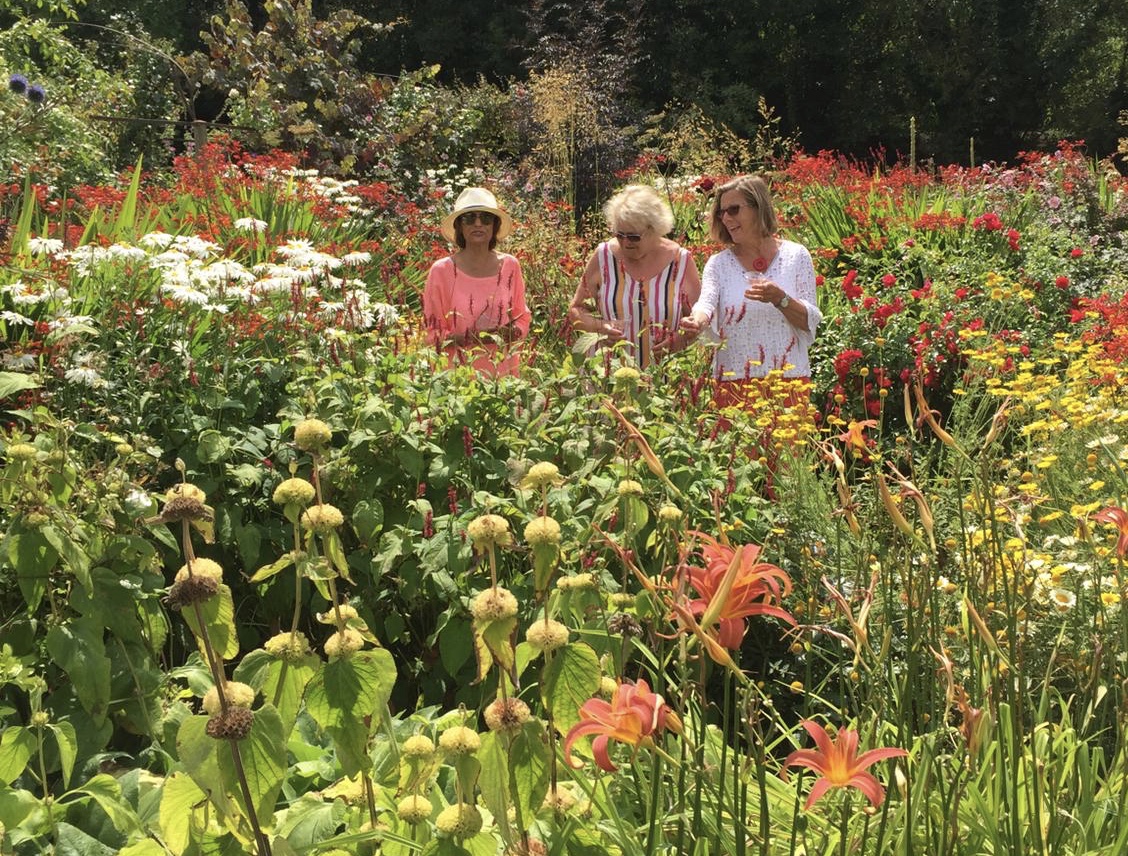 August can be a tricky month in the garden – a real injection is usually needed between the prettiness of June and July flowers, and the mellow quality of September asters and fawn grasses. What we need is HOT COLOUR and spadefuls of it to cheer us up as another summer starts to slip away. Let’s ditch subtlety (easy for me or indeed Caroline; Laura not so much …) and go for right-between-the-eyes zing to brighten the borders. Here are four of my favourites for doing just that:

2. Persicaria microcephala ‘Red Dragon’ – Knotweeds justly have a reputation for not knowing where to stop but this one doesn’t roam. At least with me it doesn’t. So far. It has the prettiest pointed leaves marked with maroon, green and white, growing on bright red stems, with small sprays of white flowers in August full of insects. The effect is delightful among flowers in the red/orange/yellow side of the spectrum. Put it with pink or purple to blow your mind.

The central pink-orange stripe along each leaf is set off by bright green margins, and the plant would look wonderful growing with my final choice for August pizzazz….

4. Crocosmia ‘Big Top’ –  The crocosmias are just fabulous for summer colour.  Some, like the common montbretia of old don’t mind their own business as much as they should, and many of the ones I grow have past their zenith by mid-August. But ‘Big Top’ (I love its name’s connotations with all the flamboyance of the circus!) is a fairly new acquisition of mine and seems to flower later than the others.  It’s just coming into its own now, with large flowers of dark orange, a yellow centre and an orange eye. Wallop!

I bet all this talk of saturated brilliant colour will give Laura the vapours…..

Yes okay Elaine wins the August border challenge hands down with the riotous smorgasbord that is her Normandy tapestry bed (see our feature pic) but was it really necessary to include all the triumphal sound effects?

I do concede that some strong primary colours coming through at this time of the year adds drama, and no, that doesn’t just mean nasturtiums Caroline, (I have just come back from a few days with her and honestly they were everywhere). As you would expect I have a more measured approach with some slow burners that smoulder rather than sizzle.

5. Tithonia  rotundifolia – This Mexican sunflower is one of the few annuals that really earns its keep with acres of good dark green foliage and sumptuous deep orange flowers on muscular stems. Start them early and cosset them under glass until mid June when you can plant them out in borders or deep pots.

6. Rudbeckia maxima – A bit of a mission to get established, this aristocrat needs a few years to develop the deep tap root that will support the eight foot tall single cone flowers that will then sway majestically amongst your Stipa gigantea in the summer breeze.

7. Chrysanthemum ‘Early Yellow’ – As Elaine says ‘who doesn’t love a yellow daisy’ but some are more satisfactory than others and my choice is this chrysanthemum which is from the hardy autumn-flowering genre, but as its name suggests, is reliably in flower by mid August, has a softer hue, quality of structure and darker stem colour that sets it above others.

8. Vireya ‘St Valentine’- Okay so my final choice is really a vanity project but I have had a yearning to cultivate a collection of the dwarf sub-tropical Vireya rhododendrons ever since since I saw them at the Edinburgh Botanical Gardens, and having badgered Ken Cox of Glendoick Nurseries to let me have a few young plants it is always a red letter day when one of them flowers.

Well I would take my hat off to anyone who could set anything alight in a Scottish border this August, you’d need a month’s worth of newspaper and a gallon of diesel.

But, like me, some plants just can’t help overachieving in any conditions:

9. Alstromeria ‘Indian Summer’ – If you’re looking for August bling, you’ve come to the right person. This a PRIDE march all on its own and what could set it off better than my fluorescent nasturtiums. This alstroemeria  came from Sarah Raven and apart from a bit of under-support (I’m sympathetic), it’s taken Scotland in its stride and requires no TLC whatsoever.

10. Helianthus annus – The common sunflower, what have my sisters got against the flowers of our childhood? This one’s called ‘Ring of Fire’ so should have a head start in setting light to any border in August.

NB Louise’s Great Plant this Month would stand out in Monty’s jewel garden, but its heritage is proper ‘old-school’.

[jetpack_subscription_form title=”The3Growbags” subscribe_text=”If you’d like to keep up to date with the3growbags gardening chit-chat just pop your email address in here” subscribe_button=”and click!”]