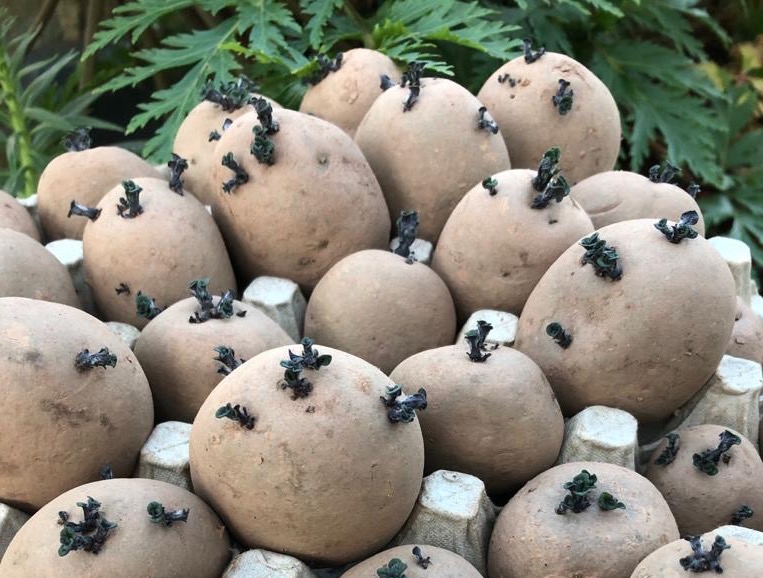 Okay, so you checked out yesterday’s blog and you’ve got somewhere to grow some veg now (don’t worry, it’s at the end of this if you missed it), and you’re keen to get started – excellent. You’re not alone – the word is spreading with plenty of people getting behind the campaign – I was even invited onto local radio yesterday to talk about it!

One of the easiest things for a beginner, I think, is some potatoes. It’s sort of magical when you dig into the soil and unearth fat new tatties. And you know your spuds haven’t been sprayed with chemicals, and they are going to taste FANTASTIC….

First of all, you need some ‘seed potatoes’ .They are easily available online since you can’t get out to a garden centre. There are dozens of different varieties in a bewildering set of categories – ‘First Earlies’, ‘Second Earlies’, ‘Maincrop’ etc. – but I would advise you to keep things very simple your first year.

And don’t buy too many! They make big plants, taking up at least 1 foot (30cm) of space all round, and it is easy to get carried away (can you hear the voice of bitter experience?!). I suggest you go for something straightforward like Arran Pilot (first early) or Maris Piper (main crop) or, say, something that you can’t usually get in the shops like the quaintly-named Pink Fir Apple (late main crop). This is a very oddly-shaped but delicious salad potato that we Growbags love growing particularly because it was our Dad’s favourite.

I wouldn’t follow her advice on gardening generally, but here’s Caroline’s planting her Pink Fir Apples at the weekend.

‘Why can’t I just buy a bag of spuds from the supermarket and stick ’em in the ground?’ I hear you ask. The fact is that you can, and you’ve probably noticed that potatoes you buy for eating at this time of year often start sprouting in the kitchen veg drawer. But there is a danger here – unlike ‘seed-potatoes’ they are not guaranteed to be free of viruses (and Lord knows, we don’t want any more of THOSE!) or a disease called ‘blackleg’ etc. They might also have been treated with a ‘chit-suppressant’ – more of that anon. So by all means have a go with a few ordinary spuds – they may be great! But I wouldn’t grow them in the ground; grow them in a pot or a bag where you can control what happens to them a bit more.

Once you’ve got your seed potatoes, you can do one of two things – plant them straight away any time from now until about the end of April, which is what Caroline does (and you know what an amazing gardener she is…………………!) or you can pop each one on a sunny windowsill for a week or so (empty egg boxes are handy to put them in) to develop some strong stubby shoots (‘chits’) before you plant them out in the soil. I usually do this because I like knowing which way to plant them in the soil (chit-side up, if you see what I mean).

Now here’s an odd thing. If you did as I do, and chitted your seed potatoes for a bit, you can see where the stems are going to come up. So if they are rather large tubers, you can actually cut them up into halves or even smaller, as long as each bit has got a sprout on it. Leave them a couple of days for the cut bits to dry out and then plant each bit separately – they’ll all grow into perfectly good plants. Nifty idea! They used that technique a lot in the Second World War, I believe, when they were all ‘Digging for Victory’ – just as we are now, in a way…………

Right, planting them. A nice sunny spot is best, though they can tolerate a bit of shade. The thing to remember is that potatoes will take about four weeks before they appear above ground, and even a touch of frost can damage the foliage. A severe frost can kill them completely. You know when the danger of frost is over in your area (it’s probably blooming July where Caroline is, in the wilds of Scotland!), so plant your spuds four weeks earlier than that. (FYI, the average for the UK is the end of April, so plant the spuds at the end of March. It’s not an exact science – some gardeners always plant their potatoes on Easter Sunday, whenever that may fall).

Now here’s a wonderful thing for everyone who has only the tiniest space to grow something to eat. You can grow spuds in all sorts of containers as well – big pots, specialised potato-bags, Bags-For-Life from supermarkets, in an old plastic compost bag with the top chopped off and most of the compost taken out, make a bag by stapling together weed-suppressing fabric……..

You just need to make sure that whatever you use has some drainage holes punched in the bottom, and away you go. I would say that a maximum of three seed potatoes would be right for these sorts of container. Fill your container with just enough compost to cover the top of the tubers. All you have to do then, is keep them evenly moist, and cover up the sprouting green foliage with compost as it grows up.

This peculiar business involves piling the soil up around the stems as they grow, which forces new potatoes to form above the ones you planted. Start doing this about five weeks after you planted them and then do it again at weekly intervals, if you can remember. Some gardeners cover all the foliage completely each time, but I quite like to keep a tuft of growth out of the top, so I can tell when they are ready to harvest.

Keep your tatties well-watered, and a bit of liquid fertiliser won’t go amiss, if you can manage it, every couple of weeks.

Most types of potatoes are ready to be harvested about five months after they were planted. Middle to the end of August in most cases. Quite a lot of spuds can be big enough to eat after only about 10 weeks, but you’ll get a much larger crop by leaving them longer. Once the leaves turn yellow, and begin to die back, you’ll know its time to leave them in the ground for one more fortnight, then dig them up. DON’T use a spade for this, you’ll heartbreakingly slice through too many tubers that way. Use a garden fork, very carefully to loosen the soil and then plunge your hands in to retrieve your gorgeous potatoes.

Never keep potatoes in a plastic bag (they sweat and rot – lovely!) use paper sacks, and store them in a cool dark place. In the light, they’ll go green and become poisonous.

I can’t promise it’ll all be plain sailing – even the best gardeners sometimes have to deal with the odd slug or blight attack……but the good old spud is generally a dependable and delicious garden stalwart.

One more thing: if you are ordering seed potatoes on line, it would be a good idea to get try and get hold of some seeds at the same time for future topics we are covering such as broad beans, dwarf runner beans, peas, carrots, onion or shallot sets, tomatoes, chard, courgettes, squashes and salad crops. Lots of excitement to come!!

NB: You can see our 14 steps to creating a veg patch here. Our regular gardening blog now includes a veg-growing section. We’d love you to join us by entering your email address here. We’ll email you every Saturday.